The Emergence of The Urban Infrastructure in Turkey

The Emergence of The Urban Infrastructure in Turkey We are one week away from the anniversary of the founding of the Turkish Republic, on the 29th of October, this occasion has become an important anniversary of the opening of most infrastructure construction projects in most Turkish cities annually, in addition to the vision of 2023, which set uncountable goals to achieve on not only national scale, but also global one, meanwhile, we'll tell the story of mega infrastructure projects in Turkey, and how it's contributed with the evaluation of the values and demands in real estate in Turkey

the story all began once the Turkish government started to solve the internal problem of Istanbul's municipalities, such as the Frequent water cuts, the lack of usable drinkable water in the first place, and the problem of garbage accumulation, For instance, the Municipality of Istanbul transformed huge problems into solutions by using garbage as a main source of energy and transforming a problem that harmed the city's standard of living, into one of the most attractive cities in the world for tourism.

Also one of the prominent problems that the residents of Istanbul were suffering from is the problem of traffic congestion, and therefore the Municipality of Istanbul, in cooperation with the Ministry of Transport in Turkey, began building many highways, metro tunnels, and water ferry lines, and the shocking news here, that all infrastructure projects wasn't at the expense of taxpayers, but by opening the way for foreign investors, in return for signing long-term investment contracts, therefore it has solved problems at present, in addition to attracting the attention of investors and businessmen all around the world to Turkey.

Solving internal problems was just the beginning of the story of the prosperity of one of the most powerful economies in the world, the Turkish economy, which today produces 1% of the worldâ€™s exports, at a time when the most powerful economies in the world are still trying to recover from the effects of the economic devastation that occurred during the past two years as a result of the outbreak of the Coronavirus in Turkey and the world.

Turkey hasn't only achieved local achievements but also solved problems related to the environment, and here we will mention several of these huge projects and how did these mega infrastructure projects have a crucial  impact on attracting the world towards real estate investment in Turkey

1- Eurasia Tunnel:
The Eurasia Tunnel (Turkish: Avrasya TÃ¼neli) is a tunnel located in Istanbul, Turkey, crossing underneath the Bosphorus with 160m as depth underwater. The two double-deck tunnels were opened on 20 December 2016, to connect the Asian side to the European one, within just 5 min, since the 20th of Dec and the tunnel is serving 120.000 passengers daily

The Eurasia tunnel project is the result of Turkish-Korean cooperation, built based on an operating contract for 20 years from the date of its opening, and the total cost of building the Eurasia Tunnel was equivalent to 1.2 billion US dollars

Also, it must be mentioned that such a mega project raised the price per square meter in the areas surrounding the two gates in both the European and Asian section, that is, in the KazliÅžiÅŸme neighborhood in the municipality of Zeytinburnu, in the European section, and on the Asian side in GÃ¶ztepe in the KadÄ±kÃ¶y municipality, At a rate of 26% of the original price per meter before the opening of the tunnel in 2016, therefore the effect of mega infrastructure project is present on the real estate in Turkey, and how it becomes an as long term investment opportunity 2- Istanbul new third airport
Istanbul's new third airport is not the largest in the world currently, but it will become accordingly with the completion of the development of the last phase of it, at the end of the year 2028, to accommodate more than 200 million passengers annually.

the location of the airport was a crazy idea for many, due to its location in the Arnavutkoy district,  which is located in the far northwest of the city, but the Turkish government had worked on a plan to expand the population and urban density towards the north, by taking into account the provision of all services, but this time also, the government will not use the money of taxpayers to build the third largest airport in the world,  but also opened the door in front of foreign investment in Turkey, through operating contracts for 25 years, the cost of building the airport amounted to 10.9 billion US dollars, In 2016 and till today, the price per square meter in Arnavutkoy and its surrounding municipalities has increased by more than 76% over its old price, especially when the highway was built, and at the same time, the foundation stone for a new metro line was laid, which is connecting the new airport to the city center within 30 min.

3- Artificial water canal :
In 2011, Turkish President Recep Tayyip Erdogan announced the first tender for the construction of the Century Project, which will be delivered by 2023, the Istanbul Water Canal Project, a project that aims mainly to protect the city of Istanbul from many environmental disasters in the long term, in addition to placing Istanbul on the list of the best Ten cities for life in the world.

The project is a 45 km long waterway connecting the Marmara Sea and the Black Sea, in the European section of Istanbul, and the artificial canal will be connected with more than 10 suspension bridges, the cost of the project is15 billion dollars, but the good news here is that a large part of The costs of the mega project will be through contracting operating contracts with Turkish and foreign companies, therefore more than 160,000 commercial marine tankers will pass through the canal yearly, but this time the crossing process will be paid, unlike the current situation of the natural Bosphorus in Istanbul.

4- The Istanbul international financial center (IFC):
Turkey achieved huge economic growth within the vision of 2023, which was announced by the Turkish president through a group of Turkish megaprojects, as the growth of the Turkish economy reached 21.7 percent in the second quarter of 2021 and is expected to rise by 9% by the end of the year, This confirms that despite the global economic downturn due to the Coronavirus, Turkey is continuing its economic growth and leadership among the twenty countries.
As part of the 2023 vision, Turkish President Recep Tayyip Erdogan announced in early 2009 the construction of one of the most important financial trading centers in the world in Istanbul, in its Asian section, which will open in the next year 2022. 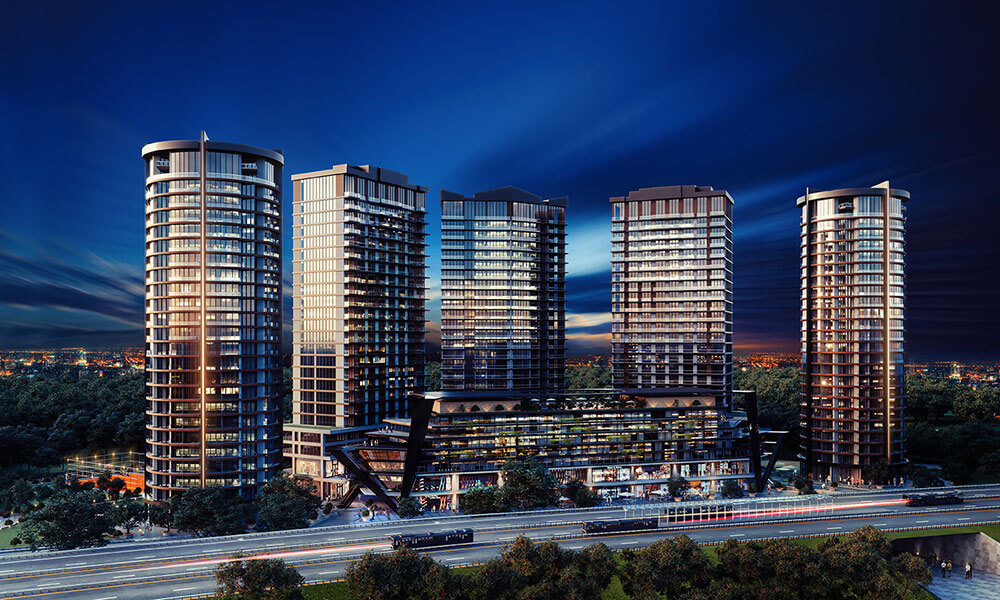